We were delighted to be given two small harps, one pictish, one wire strung recently at the Highland Branch. We asked Bill Taylor of Ardvil Harps if he could take a look at them and give them a service. In return, as Bill is a member of the Wire strung branch of the clarsach society we offered him the wire strung so that it may be used more purposefully.

He provided us with a bit of insight into the history of the Pictish harp;

"They were originally made by Tim Hobrough in Beauly in the mid-1990s. I personally worked with Tim in the early-1990s, and I recognise these designs. They were given to Balnain House by him, with the intention that visitors might be able to try them out as they explored different aspects of Scottish music on display at the museum.

Small Pictish Harp: This is the model he designed for his "make a harpin a day" workshops. It has the straight arm and pillar seen on harps in Pictish stones, something that Ardival Harps adopted and later redesigned."

This harp has 12 strings and would be perfect for a beginner. It is available to rent for £5 a month. 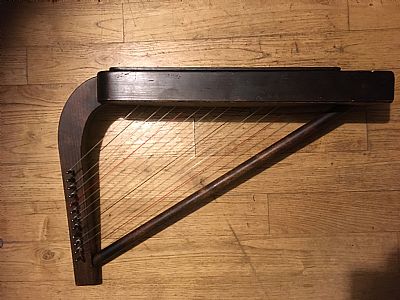