Classroom Ideas - The Application of Ringing Instruments in Schools 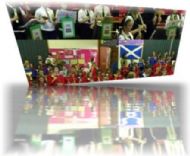 Where the school has regular whole-school assemblies each class takes a turn to accompany a particular week's singing. They practise in class playing the accompaniment chords as displayed on the overhead projector above the song words. The chord number is marked in a different colour to the text. Alternatively (and especially for younger children unable to read the text) the class teacher uses one hand to indicate the chord that is going to be played (e.g. chords I, IV or V would be indicated by one, four or 5 fingers respectively) and use the other hand to bring in the players on the appropriate beat for that chord.

Repeating rhythms developed from topic-related word-bank rhythms - the teacher claps or rings a simple rhythm while saying the words with the same syllable rhythm for the pupils to echo back (either all together as a class or perhaps in "chord" groups). At later stages the teacher introduces a new rhythm at the same time as pupils are ringing the echo of the previpus rhythm. 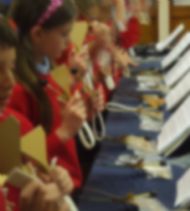 The teacher points to pupils (each lined up in scale order) to make a familiar melody which the pupils have to identify. Alternatively the letter names may be written on a chalkboard or chart and as the teacher points to each letter in turn pupils play the note they have regardless of octave.

Rhythm cards with or without topic words in that rhythm may be held up by the teacher for pupils to respond by playing.

In groups pupils make up patterns using the notes of a pentatonic scale (e.g. G, A, B, D, E at all octaves). They can then be performed by each class group in turn, or all together, or in a set pattern. Later pupils take turn to be conductors, deciding on the sequence of groups and cue signals. For pentatonic songs go to >http://www.pentatonika.net

Making a musical piece by building up a developing pattern of notes into a complex sounding piece.

Walking and ringing randonly to develop rhythm within a steady beat.

Whereby individual pupils or small groups are given a pattern to play that might be suggested by a particular keyword in a story or poem, or simply cued by the narrator of the story or poem. These would initially be teacher-determined patterns but pupils would later devise their own sound pattern for a particular word or phrase.

Pupil improvisation on a theme (e.g. space travel) where group experimentation leads to a sound picture that could accompany expressive movement by another group of pupils. 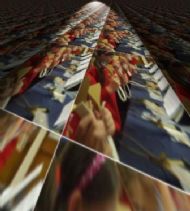 These complement the music provision in a school by offering a more intensive opportunity for pupils to develop music reading skills. Pupils read from traditional staff notation and may begin with one note each (using music that has basic rhythms and no key changes) progressing to being responsible for four notes each and reading from music that has more complex rhythms and requiring changes of notes. Performance opportunities both within and outwith school develop presentation skills for pupils performing in front of audiences.
Click here to find out more about the place of handbells, handchimes and belleplates in music education.
Malcolm C Wilson