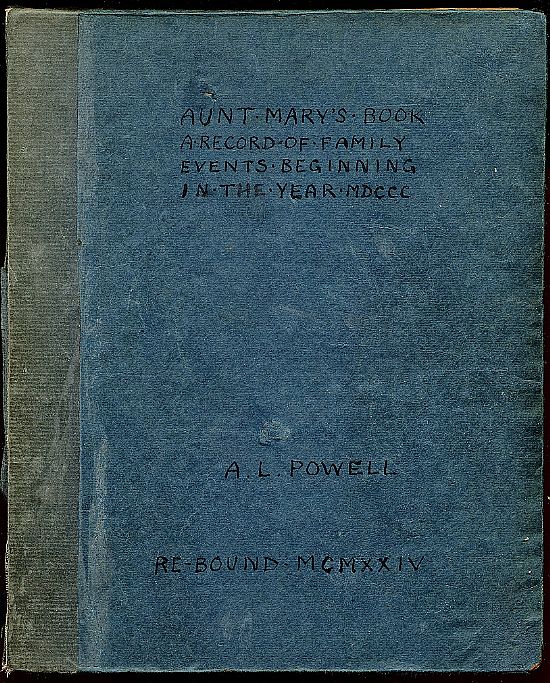 Who was Aunt Mary ?

Aunt Mary, the third child, was born in Walthamstow on 27th Oct 1802, and baptised in the Parish Church. On 12th March 1809, when Aunt Mary was just 6½, her mother died, leaving six children.

Aunt Mary was somewhat of an invalid all her life, but it is not known what form this took, nor how much she was handicapped.  She did not marry, and lived at home with her parents.  Her father was killed by lightning in 1832 aged 66, but Aunt Mary continued to live with her step-mother until her step-mother's death in 1852 at the age of 71.

A very large Family Tree is available here, in text format.  This Family Tree shows just a few - those mentioned on this page:-

[Right click on it to open a large view]

In 1854 Mary went to live with her first cousin Dr Henry Powell (6 Mar 1809 - 18 May 1867); he was a son of Baden Powell, who was a brother of her father, two of twelve children. "Baden" was the maiden name of Susannah Baden, whose daughter Susannah married Andrew Thistlethwaite, Baden's father's mother.
Henry's eldest brother was the Rev. Prof. Baden Powell.
Henry was then living in Coventry, with his wife Mary Sophia nee Watson, whom he married on 20th Jan 1842 in Tottenham.  By 1854 when Aunt Mary (then 52) went to live with them, they had had seven children, though one had died.  They went on to have three more.   Although to the children she was actually "first cousin once removed", out of courtesy and convenience she would have been callled "Aunt Mary", and would have been a great help to their mother.

In 1862 Henry and his family left Coventry and went to live at Brighton, taking Aunt Mary with them.  She continued to live with them until 1865, when her old friend Miss Elizabeth Snaith left Clapton and went to 41 Cambridge Road, Brighton, and Aunt Mary, then 63, moved in with her.

What is her Book ?

On the cover is written:-

A RECORD OF FAMILY

It is a Journal recording the bare facts of incidents in the lives of the Powell family, her cousins.  The first entry is for 11th January 1800, before Aunt Mary was born, but it seems that she actually started her Book in about 1823, when she was 21, but started by recording presumably from notes (or memories) kept by her family.

The copy transcribed here was typed out from the original by Richard C. Powell in October, 1923, when the original was in the possession of a third sister, Annie Louisa Powell (14 April 1851 - Q3, 1928), then living in St. Columba's Vicarage, Stratford, East London, the other two sisters having died.  It is her name on the cover.  To those three sisters, Aunt Mary was indeed an Aunt - their mother's half-sister.

How many copies were made, and where they and the original are now, are mysteries yet to be solved.

IF, by any chance, you should happen to have anything to add, please get in touch.

Just because there is a record in this book does NOT necessarily mean that it is 100% correct.

IF you click on any of the icons on the Right of your screen, or below this message, you will be taken to an advertising WebSite, over which I have no control.  That is what pays for this WebSite, so that when I die, this WebSite will remain.